The unknown climate-killer deal we’ll have to tackle next

The Energy Charter Treaty takes an axe to climate action

By Thomas Dauphin, trade campaigner, Friends of the Earth Europe

We climate and social justice activists are currently doing everything we can to try to prevent governments from handing massive bail-out cash to polluting industries. As Europe attempts to re-start the economy after the coronavirus crisis, with governments and the EU institutions committing to inject huge sums of public recovery money, there is a historic opportunity to build back better and create a just transition to the clean energy future we need.

But we know many big polluting businesses like carmakers and airlines want nothing more than to preserve business-as-usual – which will guarantee a deeper climate emergency. Unfortunately, despite some green rhetoric from governments, big business has so far been quite successful at winning handouts with few strings attached.

When it comes to the energy sector (the most climate-damaging of all), one powerful tool polluting energy companies have to preserve business-as-usual is a little-known trade deal, called the Energy Charter Treaty. And it’s increasingly proving to be an obstacle to climate action.

Action on the #ClimateCrisis is being BLOCKED by a little-known treaty.

Here's 10 reasons why the Energy Charter Treaty is bad for the climate and must be stopped#FossilFree #ISDShttps://t.co/Ygq9y8jYUX pic.twitter.com/lyuofX1F0p

It’s the biggest climate action killer nobody has ever heard of. The Energy Charter Treaty is a trade deal from the 1990s that gives rights and guarantees to investors in the energy sector. In practice, it mainly serves fossil fuels.

The main feature of this obscure trade pact is the possibility it offers to energy companies to sue governments before private, business-friendly courts. Concretely, energy corporations can use the deal to attack government policies that might negatively impact their profits. Policies like phasing out dirty energy or shutting fossil fuel plants.

If the corporations win the case, states must pay them up to several billions of euros of public money in compensation. Even if this conflicts with the need to take action on the climate crisis. 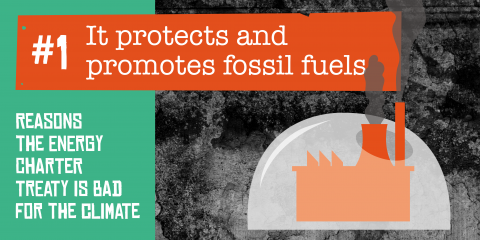 A permanent Sword of Damocles hanging over policy-makers

You can easily imagine how poisonous this treaty is to a risk averse government. Achieving a fossil-free energy system is a daunting challenge, that will require transformational action and bold changes to regulations and laws. We have just years to dismantle the fossil fuelled energy system and rapidly put in place 100% community and renewable energy.

Yet, under the threat of the Energy Charter Treaty, policy makers face a massive deterrent: an enticement to water-down or abandon green policies. This is an effect known as “regulatory chill”. A ever-present sword hanging threateningly over their heads.

It might sound like an unreal nightmare. Unfortunately, it’s already happened. Fossil-fuel companies have already sought to interfere with climate laws in France and the Netherlands. Many others have done it to challenge environmental standards, or social regulations to take energy distribution back into public hands or to regulate energy prices (see boxes 1 and 3 in our briefing). 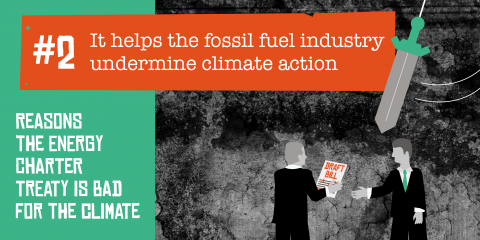 What is looming: a wave of disputes contesting rising climate action

In total, companies have already used the Energy Charter Treaty at least 128 times to challenge states (so far as we know, as there is no obligation for cases to be made public!). As a result, energy investors have been awarded $52 billion dollars by investment tribunals, and will potentially be awarded up to $32 billion more if they win the pending cases. This is billions flowing directly into the pockets of investors, rather than to support the just transition in the next years. And as governments step up climate action, the number of disputes is only likely to increase. The energy transition could face a wave of corporate attacks.

Right now, such huge amounts of public money are desperately needed to fund healthcare systems and a just recovery, not to line the pockets of dirty energy companies’ for their short-sighted risky investments. 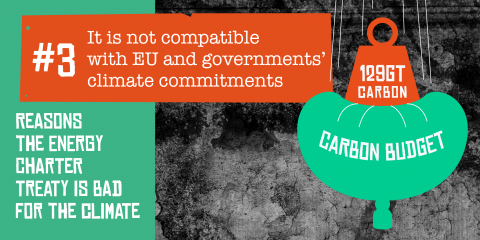 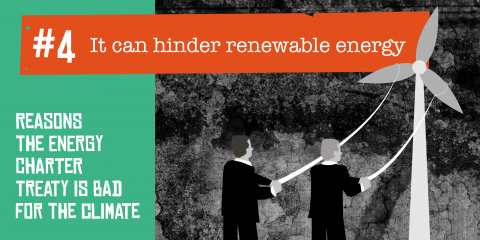 The Energy Charter Treaty is preposterous. But, despite their green rhetoric, the EU and governments do not seem to understand its potential wrecking effect on climate action. Rather, they are engaged in a lengthy process to try to ‘modernise’ (that is to say, preserve) it.

The proposed reform is doomed to fail: it does not address the core issues. And in any case would need the unanimity of ECT members, which is highly unlikely. They say they need more time for this process. But in this climate emergency, time is exactly what we don’t have.

We know what steps are needed to go fossil free and have a chance to remain on a liveable planet. Getting rid of the Energy Charter Treaty will need to be one of those steps.

That’s why 278 organisations call on the EU and governments to withdraw from or jointly terminate the Energy Charter Treaty. So far, this call is falling on deaf ears. Let’s join forces and tackle this hurdle together! 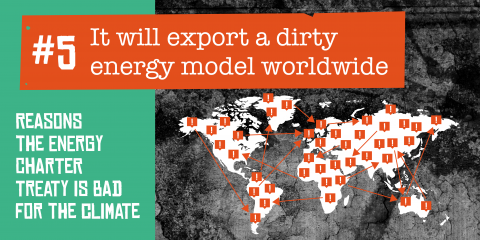